Scaramouchine realized that lawyers are recognizable anywhere when she stumbled upon the legal district of Yangon and found a group of Burmese lawyers preparing for court. Identifiable by their demeanor and their robes, the Burmese have inherited the British Common Law and wear robes to court but over the traditional longyi.

Scaramouchine began to explore the legal district of Yangon and found it unchanged since colonial days though in a state of great disrepair. Original Colonial law offices still existed unchanged, with their burmese-anglo nameplates, but the lawfirms have long decamped. Typists sit at roadside stands ready to complete legal forms using their spectacularly well maintained and creatively modified typewriters.

A Typist at his desk. Court forms are hanging from his cart and his typewriter is lovingly maintained.

The typist at his corner 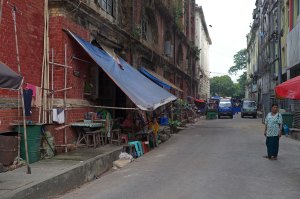 A street containing colonial law offices which have been abandoned 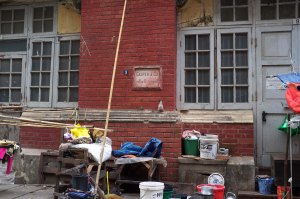 A Colonial Law office, with the name plate still in place, but the occupants long gone now inhabited by residents of the district 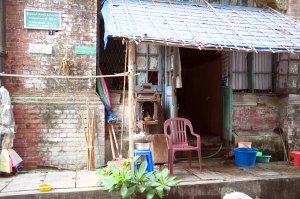 Business meetings are conducted at teashops

I rarely leave my soft bed in Vancouver. However, my alter ego, Scaramouchine, is distressingly active and right now has decamped to Asia. These are the adventures of Scaramouchine.

A blog about Amal's news & style